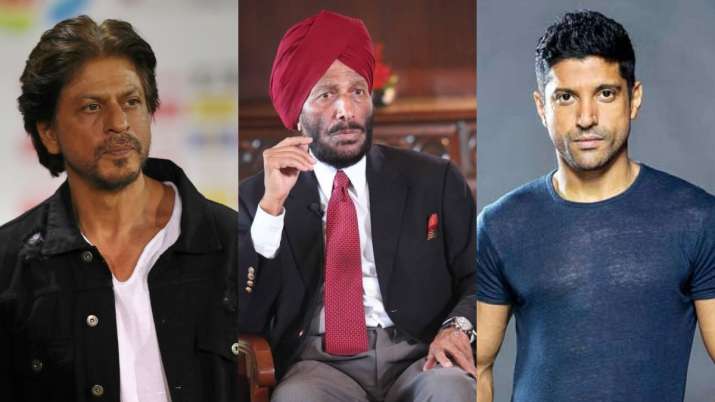 Former Indian sprinter Milkha Singh, widely regarded as Flying Sikh, passed away last night ( June 18) at 11:30 pm. He was admitted to ICU on June 3 due to dipping oxygen level. On May 20, he had tested positive for COVID19. Six days ago, on June 13, Milkha’s wife Nirmal had passed away. A former India volleyball captain, she was 85, and she too was affected by Covid and related complications. The sad demise of the legendary athlete has left a void in people’s hearts. Many took to social media to express their sadness. Bollywood celebrities including Shah Rukh Khan, Farhan Akhtar, Raveena Tandon, Angad Bedi, Madhur Bhandarkar and others also extended their condolences on the death.

Bollywood superstar Shah Rukh Khan tweeted, “The Flying Sikh may no longer be with us in person but his presence will always be felt and his legacy will remain unmatched… An inspiration to me… an inspiration to millions. Rest in Peace Milkha Singh sir.”

Akshay Kumar tweeted, “Incredibly sad to hear about the demise of #MilkhaSingh ji. The one character I forever regret not playing on-screen!


May you have a golden run in heaven, Flying Sikh. Om shanti, Sir”

Raveena Tandon wrote, “Had the honour of meeting you Sir, you will always have a special place in all our hearts ! Whenever we need to be inspired, “bhaag milkhe bhaag,” will resound in our ears ! Om Shanti.”

Actor Farhan Akhtar had played the role of Milkha singh in the latter’s biopic, Bhaag Milkha Bhaag, which released in 2013. It was directed by filmmaker Rakeysh Omprakash Mehra. The film chronicled the athlete’s struggles in his professional and personal life before he went on to attain glory. Penning an emotional note on the death of the legendary athlete, Farhan said, “Dearest Milkha ji, A part of me is still refusing to accept that you are no more. Maybe it’s the stubborn side I inherited from you.. the side that when it sets it’s mind on something, just never gives up. And the truth is that you will always be alive. Because you were more than a large hearted, loving, warm, down to earth man.”

“You represented an idea. You represented a dream. You represented (to use your own words) how hard work, honesty and determination can lift a person off his knees and get him to touch the sky. You have touched all our lives. For those who knew you as a father and a friend, it was a blessing. For those who didn’t as a constant source of inspiration and a reminder of humility in success. I love you with all my heart.”

Angad Bedi wrote, “Oh waheguru” with broken hearts while his wife Neha Dhupia reposted his Instagram post. On the other hand, Taapsee Pannu tweeted, “And he flew away.” Rahul Bose wrote, “What a sad day for India, what a sad day for sport. In the long hours I spent with Milkha Sir I was always struck by his fierce determination and his even fiercer generosity. An inspiration, period. Rest in peace, Sir. We mourn deeply. Love to @JeevMilkhaSingh and the family.”

PM Narendra Modi also condoled the death of legendary sprinter Milkha Singh. “In the passing away of Shri Milkha Singh Ji, we have lost a colossal sportsperson, who captured the nation’s imagination and had a special place in the hearts of countless Indians. His inspiring personality endeared himself to millions. Anguished by his passing away,” tweeted Modi minutes after Milkha’s death.

“I had spoken to Shri Milkha Singh Ji just a few days ago. Little did I know that it would be our last conversation. Several budding athletes will derive strength from his life journey. My condolences to his family and many admirers all over the world,” he further wrote.

Meanwhile, Prof Ashok Kumar, official spokesperson of Post Graduate Institute of Medical Education & Research (PGIMER) stated, “Legendary Indian Sprinter Shri Milkha Singh ji was admitted in the ICU of Covid Hospital of PGIMER on 3rd June 2021 and was treated for Covid there till 13th June when after putting up a valiant battle with Covid, Milkha Singh Ji tested negative. However, due to post-Covid complications, he was shifted out of Covid Hospital to medical ICU. But despite best of the efforts by the medical team, Milkha Singh ji could not be retrieved from his critical condition and after a brave fight, he left for his heavenly abode at 11.30 p.m. on 18th June 2021.”

Milkha became popular when he clocked 45.6 seconds to finish fourth at the 1960 Rome Olympic Games. Until that time, it was the closest that an Indian athlete had come to winning an individual Olympic medal.